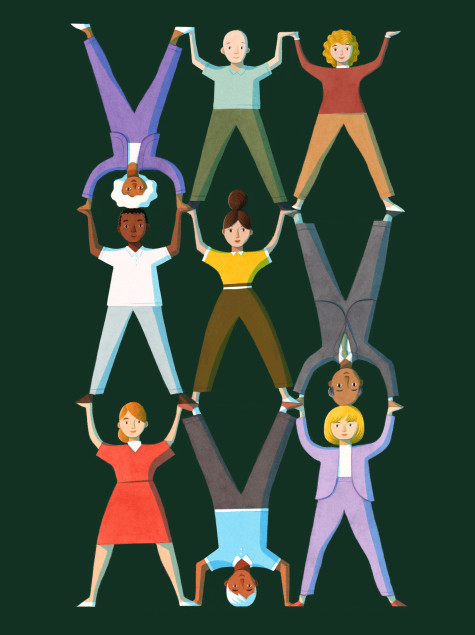 Even leaders who don’t intrinsically value diversity and inclusion have learned that they improve corporate resiliency and help the bottom line. In fact, McKinsey, Deloitte, and BCG have all published quantitative research on the benefits of diversity. The results suggest that having employees and clients with different perspectives helps companies endure and even thrive in changing times. So, why is diversity and inclusion in the workplace still an issue—and how do we go about building a true meritocracy?

Picture a child who grew up playing golf in affluent Orange County, California. He was voted most likely to succeed by his high school graduating class and attended Stanford. When reading this, what is the first image that comes to mind?

Did you picture an African American named Tiger Woods? Although there was no mention of race in this scenario, behavioral economics has shown that the human brain jumps to conclusions regardless of whether those conclusions are helpful, neutral, or hindering. Even without ill will, we make unconsciously biased assumptions based on race, gender identification, sexual orientation, military status, age, marital status, accent, and much more. Behavioral economics has come up with a few terms to describe such thinking and behavior:

These biases can lead us to make suboptimal hiring and promotion decisions. It’s all too easy to unconsciously hire people who think, act, and look like us, with similar perspectives and experiences. But these decisions reinforce groupthink and prevent our businesses from being as strong and resilient as they could be.

Fitting In Vs. Adding To

Whether on a first date or in a job interview, it’s normal to show a version of ourselves that we think someone else wants to see. We might even mirror others’ behaviors, especially if they have status, power, or influence. These attempts at fitting in might seem innocuous. But what happens if showing our true selves doesn’t go well, and we’re forced to keep important parts of ourselves hidden? Our businesses will not get the strength and benefit of viewpoints and experiences different from our own, and our team members will spend their energy and attention on fitting in rather than on the work itself. The main goal of building a true meritocracy is to resolve these issues by hiring employees based solely on their skills and talents so that differences in opinion and background aren’t unconsciously filtered out in the process.

At this point, perhaps you’re not convinced these biases affect hiring, management, and promotion decisions. Let me share a few examples that surprised me—and might even change your mind.

A case study on gender bias. Students at Columbia University were given one of two case studies on a Silicon Valley executive (based on real-life venture capitalist Heidi Roizen). The two case studies were identical other than half having the name Heidi replaced with the name Howard. Students rated “Heidi” and “Howard” equally in terms of competence, but students didn’t like “her” as much and thus were more likely to want to hire or work with “him.”

What’s in a name? In various studies on swapping names on identical résumés, those with male names were more likely to get job interviews than those with female names, and the same was true for those with traditionally “white-sounding” names compared with those with black, Asian, or other “minority-sounding” names. For example, in one study, candidates with résumés that included the names Lakisha and Jamal received 50 percent fewer job interviews than candidates whose résumés listed the names Emily and Greg—even when sending the exact same résumé.

The blind audition. In a group of major orchestras first studied in the 1970s, 95 percent of orchestra members were male. Since then, they’ve moved to blind auditions (literally putting a curtain up between those doing the hiring and those auditioning, to avoid bias based on appearances). Since implementing this practice, the percentage of female orchestra members has grown 600 percent (from 5 percent to 35 percent).

What Can You Do?

As a straight, white male with little experience knowing what it feels like to be in the minority, it’s tempting to rely on other people for information. But educating me on the minority experience isn’t a job for other individuals, and they may not feel comfortable or qualified to do so. Instead, a good place to start this journey is by simply googling “unconscious bias training.” You’ll find articles written by and about underrepresented employees that can help you better understand their lived experiences and what qualities make for an inviting culture for all. Two such eye-opening pieces are “Why Pretending You Don’t See Race or Gender Is an Obstacle to Equality” by Elizabeth Weingarten, director of the Global Gender Parity Initiative at New America, and “Why I bristle when people say, ‘I don’t see color’” by Allan Boomer, managing partner and chief investment officer of Momentum Advisors.

Research has shown that an inclusive environment is critical to retaining and getting the most from diverse talent. So while the HR label diversity and inclusion is quite catchy, I think we’re better off flipping those terms around. Many efforts to diversify are wasted because the culture welcomes only those who reflect that culture. Knowing this, my team works to seek out perspectives that aren’t popular or that go against what most believe to be true. Which brings me back to the research on improved profits. Not only does making a culture welcoming to unpopular views help employees feel comfortable sharing, but it ensures we’re getting varied perspectives, thus allowing us to make better decisions.

Further, I’m invested in reducing the impact of my biases when it comes to hiring, ensuring that I’m “fishing in different ponds” by actively recruiting outside my familiar networks. I’m also working to make the interviewing process as blind as possible. Your team can review résumés without names attached and, in many cases, ask candidates to submit written answers to questions. That way, they’re less biased by which questions they ask each candidate and won’t inadvertently lob softballs to those they’re initially most comfortable with.

Finally, in making hiring or promotion decisions, weigh the benefits of candidates based not only on their aptitude and talents but also on what their perspectives and experiences bring to the office—how they add to rather than fit in.

Building a true meritocracy, where the best employees can thrive, benefits our businesses and clients but also, of course, our employees. To build such a workplace, we must recognize how our very human biases may hinder our attempts to achieve that goal. So for the strength, profitability, resiliency, and pure enjoyment of our businesses, we must invest in becoming better at bringing in, mentoring, and valuing the voices underrepresented in our industry.

Kol Chu Birke, CFP®, is the managing principal of technology and corporate strategy and a financial behavior specialist at Commonwealth. With the firm since 1999, Kol fosters technology innovation by working with individual departments to design and implement their most impactful ideas, and he helps advisors align their clients’ actions with their goals by calming emotions, reconciling risk tolerances, and facilitating life transitions.